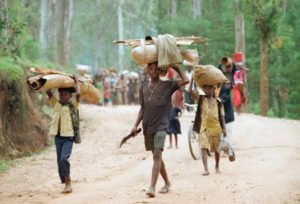 A U.S. law firm on Wednesday released a report commissioned by the Rwandan government to examine the role played by France in events leading to the 1994 Rwandan genocide.

The report compiled by Washington-based Cunningham Levy Muse LLP presented evidence suggesting that French officials were aware of and aided the actions and goals of both the Habyarimana government and the génocidaires who seized power after at the inception of the genocide.

The report cites evidence that purportedly shows French complicity before, during and after the genocide by ethnic Hutu extremists against ethnic Tutsi and some Hutu moderates.

Documents show that the French government was a close ally of the Rwandan regime that planned and perpetrated the mass slaughter of an estimated 800,000 people.

Last year, France rejected Rwandan government’s request to question some of the 22 French military officers who, Kigali said, bore some responsibility for the killings.