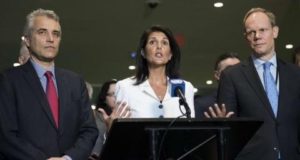 The United States, Britain and France have asked Russia to provide more information on its request to the United Nations Security Council to supply light arms and ammunition to the war-torn struggling armed forces of the Central African nation.

The request, if granted would be an exception to the arms embargo imposed on the Central African Republic.

In December 2013, the UN Security Council adopted unanimously a resolution in response to the breakdown of law and order, which saw increasing violence and widespread human rights abuses in the landlocked country.

The resolution imposed several measures including a yearlong embargo on the supply of arms, military equipment and related assistance to non-state actors in the CAR.