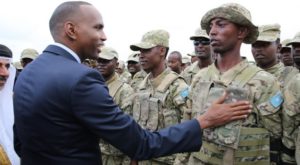 The United States on Thursday, said it is suspending food and fuel aid for most of Somalia’s armed forces over corruption concerns.

The US government suspension came after the Somali military repeatedly failed to account for food and fuel aid.

During recent discussions between the United States and the Federal Government of Somalia, both sides agreed that the Somali National Army had failed to meet the standards for accountability for US assistance, a State Department official told Reuters.

Somali army members who are actively fighting al-Shabab are receiving some form of mentorship from either the US or a third party.

The US suspension comes at a sensitive time when the African Union force – with troops from Burundi, Djibouti, Ethiopia, Kenya and Uganda – is scheduled to leave by 2020.

AU troops landed in Mogadishu a decade ago to fight the Al-Qaeda-affiliated Al-Shabaab group and Somali forces are supposed to eventually take over their duties.

But the US, which also funds the 22,000-strong AU peacekeeping force, has grown frustrated that successive governments have failed to build a viable national army.

The US has been carrying drone strikes in Somalia since 2007. The strikes have reportedly killed 677, according to the Bureau of Investigative Journalism.

In March, Trump gave the Central Intelligence Agency (CIA) and the US military broader powers to execute strikes and raid operations in Somalia.