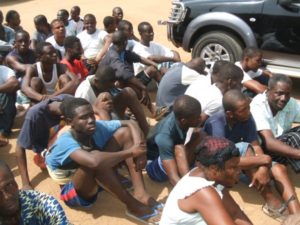 Fifty-seven Liberians in Ghana have been arrested by police in the capital city Accra, after besieging the office of the United Nations High Commissioner for Refugees (UNHCR) in the West African nation for 32 days, demanding to be resettled in Europe.

The group, including 35 women, five children and 17 men, had besieged the UNHCR office with their luggage and water, demanding to be resettled in a country other than Ghana and their home country, Liberia.

The police intervention comes after the UNHCR efforts to get them to return to their base in a refugee camp outside the capital city, failed.

According to UNHCR, there were about 11,000 Liberian refugees in Ghana. By 2013, 5,000 of them had been repatriated voluntarily to Liberia, while 3,500 opted for local integration and they were given two years’ residence permit, renewable every two years.

After rigorous investigations, 250 others were allowed to maintain their refugee status “but some others, including the people arrested by the police, opted for exemption from being repatriated or being integrated.

An Associate Protection Officer at UNHCR in Ghana, Edmund Kwofie, has stated that the UNHCR does not recognize the presence of Liberian refugees in Ghana as the Liberian refugee situation had been brought to a close since June 30, 2012.

The Liberian Embassy in Ghana said the people arrested by the police could not describe themselves as Liberian refugees in Ghana.