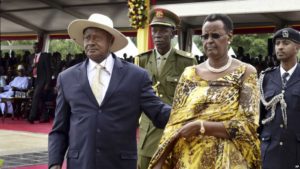 After 30 years in power, Ugandan President Yoweri Museveni will likely run for re-election in 2021 as lawmakers in the East African nation, late on Wednesday passed a contentious text amending a legislation that prevented anyone younger than 35 or older than 75 from holding the presidency.

Although Museveni has won elections – most recently in 2016 – his popular support is waning, while the arrest of political opponents and activists has significantly undermined his international legitimacy.

The Wednesday constitutional change will allow the 73 year-old leader to run for an unprecedented sixth term in office. A two-term limit was scrapped in 2005 to allow him to stand for a third term.

The ruling party, which has a majority in Parliament, had argued that the age barrier discriminated against the elderly. But the opposition insisted the measure was part of Museveni’s plan to rule for life.

Six MPs – all opposed to removal of the age cap – were suspended from parliamentary proceedings on Monday for alleged disorderly conduct, Reuters reported.

The new law also imposes a two-term limit on the presidency, starting in 2021.

Note that Museveni’s early years after taking power with the help of the Western allies, restored stability in the East African nation. But alongside, critics say he has buttressed his position by tightening control over key institutions, including the army and police.