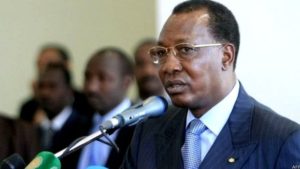 Djimet Arabi, an adviser to Deby, was named the new justice minister while Ahmadaye Abdelkerim Bokit takes over the security ministry.

The major shake-up comes amid stalled negotiations with Glencore over more than $1 billion in oil-backed loans Chad owes the commodities trader.

Glencore lent Chad’s state oil firm SHT about $1.45 billion in 2014 to be repaid with crude oil. However, talks between Chad, Glencore Plc and a group of banks to restructure the debt have stalled after Chad rejected the commodities trader’s latest proposal to delay repayment of the oil-for-cash loan.

The Central African nation is also seeking a further cut in the reduced interest rate that has been offered by Glencore and its partners.

According to the International Monetary Fund, Chad is in “debt distress” and the borrowings would be unsustainable without restructuring.

Note that out of $271 million in oil sales revenues, debt service took $231 million, leaving only $40 million to the country’s treasury this year.