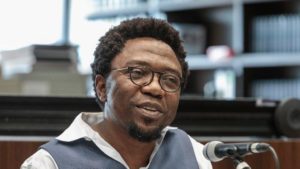 A court in Cameroon on Wednesday ordered the release of a prize-winning New York-based Cameroonian novelist, Patrice Nganang, arrested at a Cameroon airport earlier this month on charges of insulting and threatening to kill President Paul Biya.

Nganang, who teaches literature at New York University, published last Tuesday an opinion piece in French on Jeune Afrique portal critical of Biya’s handling of the crisis in Cameroon’s restive Anglophone regions. However, Cameroon’s information minister Issa Bakary Tchiroma insisted the arrest was over a Facebook post he made earlier.

Before publishing his opinion piece on Jeune Afrique Magazine, Nganang had published a post on his facebook page declaring that if given the opportunity, he would lodge a bullet on president Biya’s forehead. His post went viral in Cameroon.

What has become known as the ‘Anglophone Crisis’ in Cameroon is at the stage of an armed confrontation between secessionists and the army.

People in Cameroon’s Anglophone regions – Northwest and Southwest – have long protested against marginalization from the French majority. An attempt at declaring a symbolic independence in early October brought an estimated 80,000 people onto the streets and led to deaths, injuries and mass arrests.