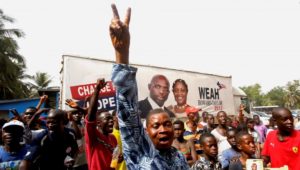 Retired footballer George Weah has been declared winner of Liberia’s presidential runoff vote held on December 26.
The soccer star defeated 73-year-old running mate Vice-President Joseph Boakai on Wednesday to become the West African nation’s 25th president.
According to the National Elections Commission (NEC), Weah, 51, had garnered 61% of valid votes cast from 98.1% of votes tallied. President to come, Weah, who won the majority vote in 12 of the 15 counties, will take the reins from Africa’s first female head of state, Ellen Johnson Sirleaf.
Hours after the announcement was made by Liberia’s electoral commission, Weah took to social media where he committed to deliver change to his fellow Liberians. In a tweet, Weah said he ‘deeply feels the emotion of the entire nation’.
From Kenya to Burundi, many African and global leaders have congratulated the ex-football star who has made history to become the first football player to be elected to the office of president in the West African tiny nation.
Weah’s election is the first democratic transfer of power in more than 70 years in Liberia, a nation founded by freed American slaves.
Nobel Peace Prize winner Ellen Johnson Sirleaf led the country from back-to-back civil wars but was criticized for not better tackling corruption in the diamond-rich nation.
The Washington-based National Democratic Institute and the ECOWAS Observation Mission which both observed Tuesday’s runoff, praised Liberians for their patience, determination and peaceful conduct of the presidential run-off poll.
The regional bloc, ECOWAS, called it peaceful and commended the elections commission for “notable improvements since the Oct. 10 polls.”