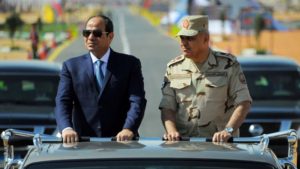 Egyptians will vote in a new presidential election in March, as incumbent AbdelFattah al-Sisi is yet to announce his candidacy and as the former Prime Minister Ahmed Shafiq, who was seen as his main challenger, announced he would not enter the race.

According to the Chairman of the National Electoral Commission (NEC) Lasheen Ibrahim who was speaking during a press conference on Monday, eligible voters in the North African nation will cast their ballot in the election on March 26–28, while expatriates will vote on March 16–18.

Candidates must submit their official bids to the commission between Jan 20–29. The final list of candidates will be announced on February 24 while the deadline for any candidate to withdraw will be March 1, Ibrahim said.

Late last year, President al-Sisi, who was elected with a landslide majority in 2013, said he will stick to the constitution and not seek a third time as Egypt’s president, alluding to his re-election in 2018, although he has not yet announced his candidacy. A former minister of defense and commander of the armed forces, Sisi is widely expected to seek a second term in office.

Al-Sisi came to power after the 2013 coup of democratically elected President Mohamed Morsi of the Muslim Brotherhood.

Khaled Ali, a prominent lawyer and Colonel Ahmed Konsowa are the other candidates interested in running in this year’s elections.