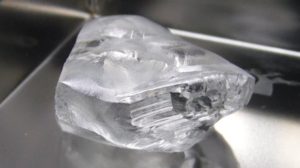 A miner in South Africa has discovered two huge diamonds, each bigger than 100 carats in a Lesotho mine, local media reports.

Gem Diamonds Ltd in a statement released on Monday said it unearthed a 117 carat and 110 carat D color Type IIa diamonds at the Letseng mine. Type IIa diamonds are the most valued and the purest type of diamonds. They contain either very little or no nitrogen atoms in the crystal structure.

The London-listed company’s stock rose as much as 8.2% on Monday.

Gem Diamonds Limited is a United Kingdom-based diamond producer, which is engaged in the exploration and development of diamond mines at the Letseng mine in Lesotho and the Ghaghoo mine in Botswana.