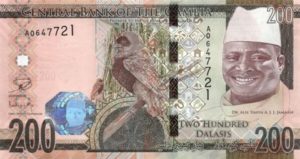 Gambia’s Central Bank will phase out local currency – the dalasi – which has the head of former President Yahya Jammeh as of February, Africa news reports on Wednesday.

President Yahya Jammeh printed his head on the country’s currency in 2015, six years after denouncing erstwhile President Dawda Jawara for doing the same.

According to the Central Bank governor Bakary Jammeh, the country will reprint the currency called the “family notes” that were in circulation prior to the printing of the Jammeh notes, while gradually pulling the current currency out of circulation.

Jammeh is currently in exile in Equatorial Guinea after he attempted to overturn an election loss in December 2016. Before he fled Jammeh plundered the state’s funds, Banjul authorities had said.

A special commission investigating Jammeh’s financial dealings have uncovered evidence that he embezzled on a massive scale.

Staff from the Gambian Central Bank and the National Petroleum Corporation have told how he used the institutions as if they were his personal cash machines, withdrawing up to $2 million at a time.