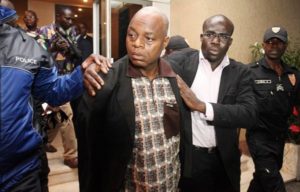 The former defense minister of Côte d’Ivoire under disgraced ex-president Laurent Gbagbo was sentenced to 15 years in jail on Thursday for conspiring against the government, local media reported.

Moise Lida Kouassi, who appeared in court along three other defendants, was convicted of “conspiring to destroy or change the constitutional system”.

The court ruled that Kouassi and his co-defendants plotted in early 2012 with former regime’s army officers who had fled to Ghana to try to topple Ouattara’s government.

Kouassi was the defense minister when a September 2002 coup attempt turned into full-scale rebellion leading to a protracted civil war, in which thousands were killed and the West African nation was divided between north and south.

He had not held a formal post since, but he was part of President Gbagbo’s team, and is seen as a hardliner.

Moise Lida Kouassi had fled to Togo’s capital Lomé following a deadly crisis in Côte d’Ivoire in the chaotic and bloody months after Gbagbo refused to acknowledge his defeat in November 2010 presidential polls.

Kouassi was arrested in Togo and deported in 2012 for trial in Côte d’Ivoire.