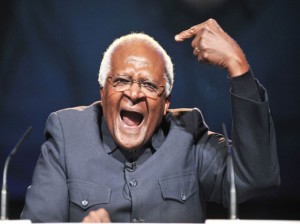 Desmond Tutu, the former Anglican archbishop of Cape Town, who gained international fame for his leading role in the struggle against apartheid in South Africa has been awarded the 2013 Templeton Prize which is worth about $1.7 Million.
The prize was awarded to Desmond Tutu “for his life-long work in advancing spiritual principles such as love and forgiveness which has helped to liberate people around the world,” announced on Thursday the John Templeton Foundation.
Tutu rose to world prominence with his stalwart – and successful – opposition to South Africa’s apartheid regime, started in the 1970s, when Tutu used positions within the church to focus global attention on the segregation practices of South Africa’s ruling minority, the foundation said in a press release posted on its website.
The foundation, based in West Conshohocken, Pennsylvania, also underscored Tutu’s role as chairman of the Truth and Reconciliation Commission set up during Nelson Mandela’s first presidential term in the early 90s to investigate human rights violations during apartheid.
Desmond Tutu, who served as archbishop at St. George’s Cathedral in Cape Town from 1986 to 1996, “employed a revolutionary and relentless policy of confession, forgiveness and resolution that helped shepherd his nation from institutionalized racial repression toward an egalitarian democracy,” the release states.
In 2007, Desmond Tutu, along with Nelson Mandela, formed The Elders group that gathers several former world leaders who devote themselves to working for peace and human rights in trouble spots around the world.
The former Archbishop has also received the Presidential Medal of Freedom, America’s highest civilian honor, from President Barack Obama in 2009.
Tutu will receive the Templeton Prize at a public ceremony at the Guildhall in London on May 21.
The Templeton Prize, considered to be the world’s largest annual monetary award for the past 40 years, honors a living person who has made exceptional contributions to affirming life’s spiritual dimension.
Established in 1972 by the late global investor and philanthropist Sir John Templeton, the prize was first given to Mother Teresa in 1973.
The prize monetary value is set always to exceed the Nobel Prizes to underscore Templeton’s belief that benefits from discoveries that illuminate spiritual questions can be quantifiably more vast than those from other worthy human endeavors.