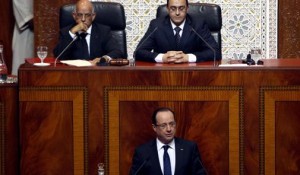 Morocco and France have pondered on ways of jointly exploring the huge economic opportunities provided by Africa and agreed to support Moroccan and French companies wishing to operate in the continent.
Africa is a “space of economic opportunities” where Moroccan and French companies can invest in joint projects and promote a tripartite cooperation, the two countries outlined in the joint statement released at the end of a two-day state visit France’s François Hollande paid to Morocco April 3-4.
Moroccan and French economic operators will find it easy to set up joint ventures and to carry out joint projects in Africa thanks to their well-established cooperation in the frame of the Club des chefs d’entreprises Maroc-France which has proved successful in promoting a mutually beneficial partnership, based on shared visions and on co-location principles.
On the sidelines of his visit, President François Hollande chaired on Thursday the forum of French and Moroccan heads of enterprises, the third forum convened in a year.
France must join efforts with Morocco, its largest trading partner, to promote growth in Africa, “a continent of the future and growth.” “We need to seek investments across Africa. We must work together to contribute to the best growth of Africa and to benefit together from this growth,” the French head of state insisted.
The French head of state who underscored the strong relationship binding his country to Morocco called on French businessmen to increase and diversify their investments in the North African country, particularly through the SMEs, whose presence in the Kingdom is hardly noticeable.
“The majority of the CAC 40 companies are present in Morocco, some for over 80 years. However, there are few French SMEs in the Kingdom,” President Hollande told the forum organized by the General Confederation of Enterprises of Morocco (CGEM) and the MEDEF International, on the theme “Morocco-France: New cooperation for a sustainable partnership.”
Pointing out that Morocco is no longer a developing country, but “an emerging country, which is fully integrated into the region and which have performing enterprises,” President Hollande said Morocco is changing and is gaining in size and influence on the regional and world scales.
He also said that the co-location partnership must be designed so as to create additional activities both in Morocco and in France following the win-win principle.
President Hollande who recalled that the French Development Agency (AFD) contributes to several projects in the sectors of energy, water, rural development, education, industry and mining, training, health, social housing…pointed out that France is the largest investor in Morocco, with €6 billion over the last decade and €1 billion in 2012 and that the presence of some 800 French companies in Morocco translates France’s degree of confidence in the Kingdom.
The businessmen participating in the forum have also stressed the need for the two sides to explore all other possible partnerships and other markets and develop new approaches to co-development and co-investment including the establishment of joint ventures and investments in Africa.
They underlined in this vein the position of Morocco as a hub of African foreign direct investment (FDI) and as an excellent platform to access an African market of over one billion consumers.
In the joint statement released at the end of President Hollande’s visit, the two countries underlined that the new momentum the presidential visit gave to bilateral relations will also impact positively on the whole Euro-Mediterranean relations thanks to the two countries’ shared aspiration to establish a renewed partnership between the two shores of the Mediterranean based on democracy, shared prosperity and solidarity.