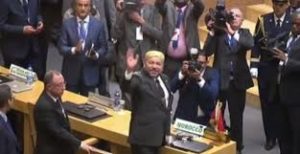 ing Mohammed VI of Morocco, who submitted Monday (Jan.29) to the 30th African Union Summit the African Agenda on Migration, has called for the setting up of an African Migration Observatory that would be tasked with understanding, anticipating and acting on the migration phenomenon.

The mission of the African Migration Observatory “would be to develop observation and the exchange of information between African countries in order to promote controlled management of migration flows,” the King explained in a message to the African summit that was read out on his behalf by Head of the Government Saad Eddine el Othmani.

The King who proposed that this Observatory be based in Morocco, also suggested the creation of a post of AU Special Envoy for Migration, who would be tasked with coordinating AU policies in this area.

The Monarch, who was appointed by the continental organization leader on the migration issue during the 28th AU Summit, said in his message that the African Agenda on Migration is the outcome of the regular consultations he had with many Heads of State on the occasion of various meetings and contacts.

The document, he said, “enjoys broad ownership thanks, notably, to the convening of two important meetings: the Regional Meeting of 2 November 2017, at Skhirat, which brought together more than 120 decision-makers, representatives of international organizations, researchers and members of civil society, and the Ministerial Conference, held in Rabat on 9 January 2018, which was attended by approximately twenty ministers, representing the continent’s five sub-regions, the AU Commission and the Regional Economic Communities”.

The document, which includes the ideas, proposals and thoughts shared by official institutions, civil society organizations and researchers from Africa should serve to inspire our future action regarding this question, the Monarch stated further.

As regards migration management, the Agenda proposes an approach based on national policies, sub-regional coordination, a continental vision and international partnership.

“This presupposes a paradigm shift, an introspective and positive redefinition of migration as well as genuine political will on the part of States, which all have a vested interest in making sure migration is safe, legal and orderly, seeing to it that human rights are respected,” he said.

This Agenda should seek to make migration a lever for co-development, a pillar of South-South Cooperation and an instrument of solidarity, the King insisted.

King Mohammed VI also dispelled in his message the myths and misconceptions associated with the migration issue, saying “there is no massive influx of migrants, since the latter account for only 3.4 per cent of the world population”.

“African migration is essentially intra-African. Worldwide, migration accounts for less than 14 per cent of the population. As far as Africa is concerned, 4 out of 5 African migrants remain in the Continent,” the Monarch underscored, stressing that “Migration does not impoverish host countries since 85% of migrants’ incomes remain in those countries.”

“Migration is a natural phenomenon, which is part of the solution, not of the problem. We should adopt a positive stance on the issue of migration by highlighting the humanistic rationale of shared responsibility and solidarity,” he said.

After he recalled that since 2015, more than 6,200 African migrants have lost their lives in the Mediterranean, the King called on African states to act “to ensure that the deaths of women, children and men in Lampedusa and that the infamous practices in Libya will not remain without consequences”.
“How many more migration-related tragedies do we still have to witness before our societies change the way they perceive migration?” he wondered, adding that “More than ever, our continent needs to address migration in a spirit of unremitting solidarity. Our collective wisdom will be our main asset as we seek to implement the African Agenda on Migration. Unity is the key to success; inter-African cooperation is the pathway to it”.