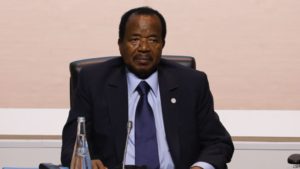 The two newcomers are from Anglophone Cameroun, two regions hit by a political crisis since November 2016. People in the region have long decried marginalization by the French majority.

An attempt to declare independence under the Ambazonia republic on October 1 was met with a security clampdown leading to deaths, injuries and mass arrests by security forces.

According to the Friday presidential decree, the Prime Minister Philemon Yang and Information Minister Issa Bakary Tchiroma were among those maintained in their positions.

The reshuffle comes on the eve of major fresh elections in the central African nation. A presidential decree issued last month slated senatorial polls to be held on March 25, 2018. The elections will in effect mark the start of a busy electoral calendar as it is set to be followed by local, legislative and presidential elections later this year.

President Paul Biya is expected to seek another term in office after over three decades in charge of the oil-rich nation.