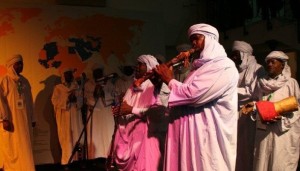 United Nations Educational, Scientific and Cultural Organization (UNESCO) is reviewing the request made by Algeria to classify the Ahellil as part of UNESCO’s world intangible cultural heritage under the category of traditional music. Ahellil has been listed by the organization as a National Intangible Heritage but Slimane Hachi thinks that the approval of the request “will be probably a tool of protection and preservation of this heritage.”
Ahellil is a poetic and musical genre emblematic of the Zenete population of Gourara found in the southern part of Algeria. The music is now on the verge of disappearing because of the lack of transmission to the younger generations. The principal musical instrument is a flute.
Slimane Hachi serves as the director of Algeria’s National Centre of Prehistoric, Anthropological and Historical Research (CNRPAH) located at Beni-Abbes. According to him, the demand is being examined by the International Cultural Instance. CNPRAH, in collaboration with the ministry of culture, has been behind the initiative to make Ahellil a world intangible cultural heritage.
To support their will, the director of CNPRAH said they have complied and digitalized the tape recordings of 850 traditional and popular magnetic tapes from different regions within the country. The compilation was done with the help of a research team led by Maya Saidani.
Director Hachi said that the compilation and digitalization of the recordings will boost the capacity of the national center. He added that the recordings will also be available to researchers and other university academics interested in the preservation of their cultural heritage. He was speaking at the sidelines of the 4th International Symposium of Anthropology and Music.