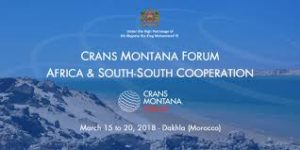 King Mohammed VI of Morocco has once again stressed on Friday the importance of the promotion of South-South cooperation as a means to meet the legitimate expectations of African populations and ensure Africa’s emergence.

In a message he addressed to participants in the 4th edition of the Crans Montana Forum, which kicked off Friday in Dakhla, King Mohammed VI poin ted out that Morocco has made of South-South cooperation an instrument for the advent of a new Africa that believes in its potential, stressing that this is a constitutional commitment enshrined in gold letters in the Kingdom’s supreme law.

“I have made the bold decision to put that cooperation at the heart of my country’s African policy. Under my stewardship, Morocco has shaped a truly innovative South-South cooperation model based on the exchange of knowledge, skills, expertise and resources. This model involves all of the Continent’s sub-regions and relevant sectors,” the Monarch pointed out.

The South-South cooperation initiated by Morocco, as a means for fruitful, principled partnership with African countries, is meant to be integrated and multidimensional, he stated, recalling that Morocco has gained expertise, which is widely recognized in Africa, in the areas of the transfer of technology, the sharing of know-how, the establishment of public-private partnerships in various domains, or training and higher education.

“Over the last 15 years, 1,000 cooperation agreements have been signed with 28 African countries. They concern such diverse sectors as education, health, infrastructure development, training and agriculture. Because it puts man at the heart of its concerns and incorporates the economic, social, cultural, spiritual, security and military dimensions, the Moroccan model is unique,” he stated further.

He went on to say that Morocco, which undertakes to strengthen relations of cooperation and solidarity with the peoples and countries of Africa, including the Sahara and Sahel countries, “is one of the African countries nurturing the ambition and desire to ensure that Africa becomes master of its own destiny”.

Morocco, which defines cooperation strategies in the light of sister nations’ needs, has an African student population attending Moroccan universities and higher education institutions in excess of 25,000, he recalled.

“The Kingdom is also keen to implement major strategic projects in Africa. I will mention just two recent ones: the first is the Africa Atlantic Gas Pipeline, aimed at reshaping the regional electricity market, and the second concerns the establishment of fertilizer production plants, in cooperation with Ethiopia and Nigeria, with a view to improving agricultural productivity and promoting food security throughout the sub-region,” he underscored.

Recalling Morocco’s return to its institutional family, the African Union, precisely “to achieve a mutually beneficial relationship based on sharing and to consolidate existing sub-regional partnerships”, King Mohammed VI called on all African countries “to get more closely involved in this constructive cooperation by helping to enhance the efficiency of our regional and sub-regional institutions as instruments for the achievement of integration across the Continent”.

The Monarch then underlined the paradox facing the continent, which has practically all the natural resources required for sustained human development, and yet where populations are suffering from poverty and marginalization in the global economic system.

Deploring that intra-African trade accounts for only 13% of all commercial activity in Africa and represents a mere 2 per cent of global trade, he stressed that “today, more than ever, the African continent must make the most of globalization”.

The Crans Montana Forum, which is holding its annual edition in Dakhla for the forth year in a row, has become a must-attend international event that brings together high-level political decision-makers , representatives of the business community, intellectuals, civil society activists from all walks of life and opinion makers from the four corners of the world.

The Forum debates focus on South-South cooperation and several issues of interest to Africa.