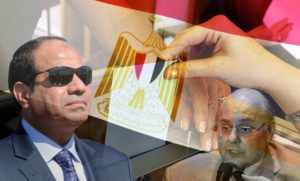 Egypt’s 60 million eligible voters have begun three days of voting on Monday to elect a new president, who will undoubtedly be the incumbent Abdel Fatah Al-Sisi, who is running unchallenged after all credible opponents were prevented from getting on the ballot.

The 2018 presidential election is the third poll to take place in Egypt since the January 2011 revolution.

President Sisi’s main challenger for this election is the little-known centrist politician Moussa Mostafa Moussa, chairman of the Ghad Party. The Engineer who has declared that he “is not here to challenge the president,” entered the race at the last minute after five other potential challengers were blocked from running in the race.

Fourteen international rights groups, including Human Rights Watch and the International Commission of Jurists, condemned the Monday polls, accusing the incumbent president of having “trampled over even the minimum requirements for free and fair elections.”

The current presidential term in Egypt is 4 years, with a possibility of re-election for a second term.