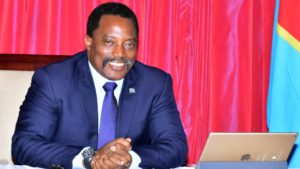 Botswana’s new leader has urged DRC President Joseph Kabila not to stand for re-election in the presidential poll expected this year. The election – now scheduled for Dec. 23 – has been repeatedly delayed.

In February, the government of Botswana issued a statement openly blaming the president for Democratic Republic of Congo’s deteriorating humanitarian and security situation.

President Mokgweetsi Masisi, who took office this month, in an interview with London’s International Institute for Strategic Studies said President Kabila has stayed in power longer than the time that was expected.

Botswana urges the international community to put pressure on the leadership of DRC to relinquish power and pave the way for the ushering in of a new political dispensation. Kabila’s opponents suspect him of seeking a referendum to change Congo’s constitution to enable him to run for more than two terms.

Kabila took power in 2001 after his father’s assassination and had been expected to step down in 2016 after the two terms provided for in the constitution.

However, he stayed on citing logistical challenges hampering the organization of elections. He denies he is trying to cling to power but has refused to publicly rule out he would enter the presidential race.