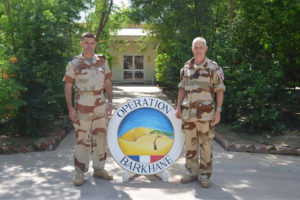 The commander-in-chief of Barkhane Operation, General Bruno Guibert, has deplored the delay in fulfilling the international community’s pledges to support the G5-Sahel, set up to fight terrorist groups swarming in the region.

The three-star General Bruno Guilbert who is in command of Barkhane since July 2017 expressed, in an interview with French magazine l’Express, deep concern about the operationalization process of the G5-Sahel counterterrorism force, noting that the international community is making many promises, but is struggling to honor them.

“It’s been eight months since the decision (to set up the G5) was made. This force should have been operational by now, and we’re still talking about the need to raise €400 million to achieve this goal. Except for the donation made by France, in the form of equipment, there is not much that has been done,” General Guibert deplored, noting that “it is now that our African partners need help to set up a joint force that does not even have an operating budget”.

The interview came following the deadly assaults launched by jihadist fighters against an entrenched camp of the United Nations Multidimensional Integrated Mission for the Stabilization of Mali (MINUSMA) and Operation Barkhane, on April 14.

The attacks left a peacekeeper from Burkina Faso dead and several others wounded, including seven French soldiers and two Malian civilians.

Barkhane commander explained that the scale of April 14 attacks showed new tactics, notably the use of suicide car bombing perpetrated by women, and the connivance between the different terrorist groups operating in the Sahel.

“It was a complicated attack combining direct shooting, RPGs, suicide attacks using multiple vehicles and deployment of fighters equipped with explosive belts who tried to push on through the inside of the headquarters,” he said, noting that the terrorists however suffered a resounding defeat and had to flee.

The Group for the Defense of Islam and the Muslims, led by Touareg Iyad Ag Ghali, “has been restructured and renewed following our strikes in mid-February,” he said, adding that the terrorist group “was looking for a key event to reboot its operational capacity and demonstrate it through attacking international forces.”

For the Operation Barkhane Commander, the Sahel is in a security emergency. During the G5 latest meeting, the countries of the region have all expressed concern over the deadly threat weighing on them.

The countries of the region understand that terrorism endangers their very survival, in view of the weakness of states, he said. Acknowledging that the remedy will take time, General Guibert stressed the need to pool efforts to give an African response to a regional challenge. He underlined in this connection the relevance of the principle of a joint brigade that would operate primarily in the border areas, the spots favored by jihadist groups.

The real difficulty, he noted, is that this joint force must be provided by the armies of states that are among the poorest in the world.

Northern Mali had fallen in March-April 2012 under the control of jihadist groups linked to al-Qaeda.
These groups were largely driven out following the launch in January 2013 of a French military intervention.
But entire areas are beyond the control of Malian, French and international forces, and are regularly targeted by deadly attacks, despite the signing in May-June 2015 of a peace agreement, supposedly to isolate the jihadists, but whose implementation has been delayed.

Since 2015, these attacks have spread to central and southern Mali and the phenomenon is spreading to neighboring countries, particularly Burkina Faso and Niger.

The G5 Sahel force, bringing together troops from Burkina Faso, Mali, Mauritania, Niger and Chad, was hailed as a milestone in cross-border cooperation against terrorist groups, which have spawned in the region.