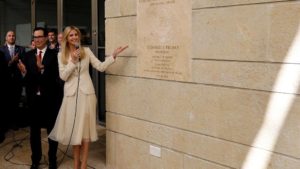 Moscow and Cairo on Monday slammed the United States decision to open its embassy in Jerusalem.
According to Russian Foreign Minister Sergei Lavrov, the status of Jerusalem should be resolved exclusively through direct dialogue between the leadership of Israel and Palestine.
The Egyptian foreign ministry, in a statement expressing “strong denunciation” of Israel’s use of force against Palestinian civilians, said Cairo “totally supports the legitimate rights of the Palestinian people.”
The United States “betrayed” the peace process by opening an embassy in Jerusalem, the ministry said.
The embassy move follows U.S. President Donald Trump’s decision last December to break with decades of U.S. policy and recognize Jerusalem as the capital of Israel.
The decision has delighted Israel and Prime Minister Benjamin Netanyahu, who welcomed the decision, saying it reflected that “the Jewish people have had a capital for 3,000 years, and that it is called Jerusalem.”
The move upset the Arab world and Western allies. Palestinian President Mahmoud Abbas called it a “slap in the face” and said the United States can no longer be regarded as an honest broker in any peace talks with Israel.
Arab nations and the world’s largest body of Muslim-majority nations on Monday said it “strongly rejects and condemns” the White House’s “deplorable action”.
The 57-nation Organization of Islamic Cooperation said it considers the U.S. move an “illegal decision” and “an attack on the historical, legal, natural and national rights of the Palestinian people.”