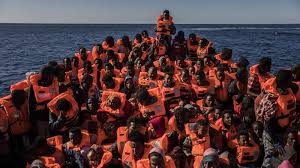 A boat carrying illegal migrants toward Europe has sunk this weekend off the coast of Tunisia drowning at least 48 people, while dozens more could be missing.

According to Tunisian authorities, 68 people were rescued after the boat sank in the Mediterranean Sea near Kerkennah island. Survivors say that more than 180 people were jam-packed in the smuggling boat – double its capacity – when it started taking on water and sank.

In recent months, Tunisia and Libyan have increasingly become a point of departure for Europe-bound migrants fleeing poverty and conflicts in Africa and the Middle East.

On Sunday, Spain’s maritime rescue service said it had rescued 240 people trying to cross the Mediterranean from North Africa over the weekend, and one person had apparently drowned. The rescued migrants were in 11 small boats attempting the perilous crossing from Africa to Spain.

The UN says at least 660 migrants have died crossing the Mediterranean so far this year. According to the International Organisation for Migration (IOM), 32,080 migrants and refugees entered Europe by sea during the past six months of 2018, with about 42 per cent arriving in Italy and 34 per cent in Greece, with the remainder (24 pc) arriving in Spain.

This compares with 70,870 arrivals across the region through the same period last year and about 230,230 at this time in 2016. For IOM Rome, the 13,430 migrants, who are registered as having arrived by sea to Italy this year, are 78 pc less than that reported last year in the same period.

In Spanish waters, IOM Madrid’s Ana Dodevska reported Monday that a total of 3,028 migrants have been rescued on the Western Mediterranean route through 30 days in May – compared with 835 for the entire month of May last year. That brings to 7,655 the total number of men, women and children who have been rescued trying to enter Spain by sea this year.