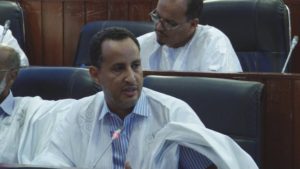 Mauritanian former senator Mohamed ould Ghadda is victim of “arbitrary” detention and must be released with the benefit of compensation, a working group of the United Nations said in a statement.

Mauritanian authorities arrested Ghadda on August 10, 2017, five days after Mauritanians voted in a referendum to dissolve the country’s Senate, of which Ghadda was a member.

Ghada is member of a coalition of opposition parties — the National Forum for Democracy and Unity (FNDU)– and is considered as one of the most vocal critics of President Mohamed Ould Abdel Aziz.

The outspoken opponent said the referendum was a manoeuvre by President Mohamed Ould Abdel Aziz to consolidate power and prepare constitutional changes that would permit him to serve beyond his current term in office.

A working group of the United Nations (UN-experts) in a document addressed to the Mauritanian authorities said the ex-senator is innocent and must be released with compensation.

The UN experts believe that the former senator “should not be tried,” while noting that he is still the subject of criminal proceedings that do not guarantee the respect of his rights.

The UN Working Group’s Document on Arbitrary Detention recalls the political context of the arrest of Mohamed ould Ghadda, and notes that the ex-senator was “exercising his right to freedom of expression, a key principle of fundamental freedoms.”