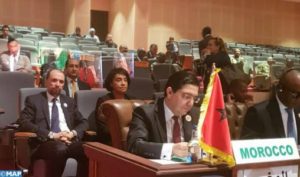 Corruption is endemic in Africa and one of the major hurdles impeding the emergence of the Continent, said King Mohammed VI in a message addressed to the African Union Summit, which opened Sunday in Nouakchott under the 2018 theme of the year “Winning the Fight Against Corruption: A Sustainable Path to Africa’s Transformation”.

This plague is “not just a moral or ethical issue”. Corruption “has an economic cost as well. It puts a strain on the purchasing power of citizens, especially the poorest segments of society”, said the Moroccan Sovereign in his message that was read out by Foreign Affairs Minister Nasser Bourita.

In some sectors of activity, corruption “represents 10 pc of the cost of production”. This scourge “perverts the tenets of democracy”, “undermines the rule of law”, “affects the quality of life and promotes organized crime, insecurity and terrorism”, said the Monarch.

In the relentless fight against corruption, some African countries – and their number is quite significant – are outperforming others, including some among the most developed nations. “These are models which incite us to take the same path”, underlined the royal message.

According to the Moroccan King, the fight against this phenomenon requires the coordination of experiences and the pooling of expertise, building on a common vision shared by all stakeholders.

However, corruption is neither specific to Africa, nor a typically African scourge. It is rather a universal phenomenon, explained the Monarch, stressing that this issue is not inevitable in Africa.

“The fight against this scourge should be made a priority because corruption is the biggest obstacle to economic and social advancement and to the development of our young people,” added the Sovereign, affirming that the well-being of African peoples hinges on prevention and on fostering a sense of responsibility in all actors in society.

To tackle this challenging phenomenon requires sustained and combined efforts from governmental authorities and civil society, underlined King Mohammed VI, saying that “by winning this battle, we will shape the Africa we want to bequeath to our children: a prosperous, solidarity-based Africa that is at peace with itself”.

He also recalled the efforts made by Morocco in the fight against corruption, citing in this regard the ratification by the North African Kingdom of the UN Convention against Corruption, the harmonization of Moroccan legislation with international standards and the adoption of a national strategy against corruption.

A panel discussion, led by Nigeria’s President Muhammadu Buhari and the champion of the 2018 theme, will take place at the Summit to evaluate the progress made in fighting corruption and developing new strategies to curb the vice.