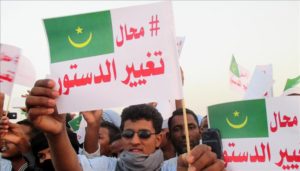 The National Forum for Democracy and Unity (FNDU), a group of the Mauritanian opposition, calls on participants at the upcoming African Union summit in Nouakchott to seize this opportunity to challenge African leaders on the nature and mode of governance of President Mohamed ould Abdel Aziz.

Mauritania is the official host of the 31st Ordinary Session of the African Union Summit convened in Nouakchott July 1-2.

In a statement released on Wednesday, the coalition highlights “the authoritarian drift” and “mismanagement” of public affairs by the Nouakchott regime.

The FNDU presents “a regime stemming from a coup d’état perpetrated on August 6, 2008, which was condemned at the time by the African Union, and which concentrates all the powers in the hands of the Executive, reducing all the other institutions to their simple expression .”

The document cites the case of the National Assembly “transformed into a simple registration chamber” and the abolition of the Senate whose mission was “to ensure the autonomy of local authorities.”

Moreover, “the judicial system, the cornerstone of any viable rule of law, is one of the first victims of this autocratic drift, because always instrumentalized to serve political purposes.”

The document of the Mauritanian opposition also highlights the problems related to the management of the national question, with the repression against the Black African community through unpunished acts, the age-old problem of slavery, etc.