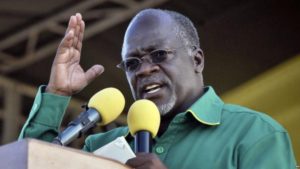 John Kijazi, the Chief Secretary at State House in the commercial capital Dar es Salaam, said Nchemba has been replaced by Kangi Lugola who served as Deputy Minister in the Vice-President’s Office responsible for Environment.

The mini shake-up saw new ministers in charge of water and infrastructure appointed. Magufuli also added an additional deputy minister at the ministry of agriculture.

According to a statement released by the President’s office, a deputy minister has been appointed at the ministry of agriculture “because of the importance of the agriculture sector”.

Magufuli, nicknamed ‘The Bulldozer’ for his forceful leadership style, did not give any reason for dropping the Minister for Home Affairs in the reshuffle.

Last year, Magufuli banned the export of unprocessed minerals as the government squeezed mining companies for higher revenues and royalties.

Earlier this year, critics say his cost-cutting measures and policy changes are excessive and undermine growth by stifling foreign investment in critical sectors.

Tanzania’s economy is expected to grow by 7.2 percent in 2018, up from around 7.1 percent last year.