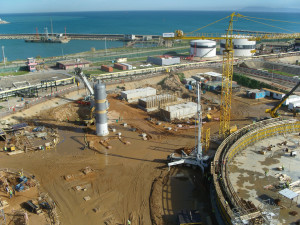 Yousef Yousfi, Algeria’s minister of Energy and Mines has told reporters that the government is planning to begin the construction of a nuclear power plant in 2025.
If the plan gets executed in more than a decade from now, it will be the country’s first nuclear plant. The deadline to get its first plant has been pushed by this recent announcement to five years compared to the last announcement the authorities made in 2008. Authorities are finding it difficult to keep up with electricity demands. Several renewable energy projects have been launched by the government to ease the pressure despite Algeria being a major oil supplier in the sub-region. The launch of nuclear power is part of a renewable energy program of the government in a bid to diversify the country’s energy. Solar energy is also witnessing some investments.
Algeria has uranium reserves estimated to be around 29,000 tons. Minister Yousef Yousfi said this amount is sufficient to launch two nuclear power plants with a capacity of 1,000 megawatts each for a period of 60 years. The minister said that they “are working” on the plans and 2025 is their target to “set up” the plant. The newly established Nuclear Engineering Institute will be taking care of providing specific training for engineers and technicians ahead of tasking them with the mission of running the plant.
This is the second announcement Algeria is making with regards to its nuclear plans. Five years ago, the government announced that it was working on constructing a nuclear power plant in 2020 and will be gradually constructing a new plant every five years. Eight years to that deadline, the plan has already been revised and delayed.