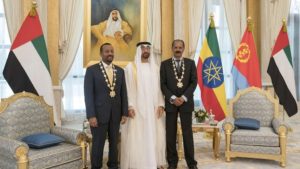 Ethiopian Prime Minister Abiy Ahmed and Eritrean President Isaias Afwerki have been awarded the Order of Zayed, the United Arab Emirates’ highest medal, in recognition of their efforts to establish peace between the two African nations.

The medals were handed to the two African leaders by the Crown Prince of the UAE, Sheikh Mohamed Bin Zayed, at a ceremony held Tuesday in Abu Dhabi.

Crown Prince Sheikh Mohammed re-affirmed the commitment of the UAE to consolidate its partnership with Eritrea and Ethiopia and to support their peace and development efforts.

The Ethiopian Prime Minister Abiy Ahmed and the Eritrean President Isaias Afwerki who arrived in Abu Dhabi Tuesday held a tripartite summit with their host.

Eritrean Information Minister said in a tweet that, “The consultations underway underpin commitment of the parties for broader & robust regional cooperation and coordination.”

Even though details of the talks at the summit have not been disclosed, PM Abiy’s Chief of Staff had said in a tweet, “The leaders are expected to discuss concrete ways of strengthening investment & commercial ties”.