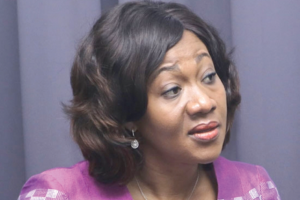 The Executive Director of the Institute of Economic Affairs (IEA), Jean Adukwei Mensa, has been nominated as the new Chairperson of the Electoral Commission of Ghana. This was announced in a statement from the Presidency.

President Akufo-Addo on June 28, 2018, removed the Chairperson of the Electoral Commission, Charlotte Osei and her two deputies — Amadu Sulley and Georgina Opoku Amankwa — from office upon the recommendation of a committee set up by the Chief Justice, to investigate separate complaints brought by some Ghanaian citizens.

Madam Charlotte Osei, who was appointed by ex-President John Mahama, was accused of various procurement breaches, whilst her deputies were also found guilty of same offenses as well as financial malfeasance.

Jean Mensa’s IEA has played an instrumental role in Ghana’s governance issues, politics and elections. As the Executive Director of the Institute, she has been the Coordinator of the Ghana Political Parties Program.

A lawyer by profession Mrs Mensa was heavily involved in the development of policies such as the Presidential Transition Act of 2012, and the revised 1992 Constitution of Ghana which is currently in a draft form.

She also helped in formulating and later in revising the Political Party funding Bill.