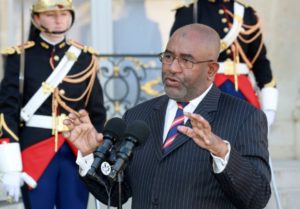 Comoros holds a referendum on Monday to extend presidential term limits and change the current system which sees power rotate every five years between the archipelago’s three main islands. The move will allow President Azali Assoumani to run for two fresh five year-terms.
President Azali only took office in 2016 but wants to hold a fresh vote next year, two years early, so that he can remain in power beyond 2021 when his currently non-renewable term would otherwise end.
The incumbent, who has campaigned for a “Yes” vote, argued that the new constitution would uphold “the principle of the continuity of the state for future leaders.”
The opposition has denounced the referendum as illegal and described it as a “coup de force of the president”.
The last two months saw demonstrations in several towns in the volcanic Indian Ocean Archipelago off Africa’s east coast against the proposed poll, one of a number of controversial Azali initiatives.
The African Union has emphasized the need to respect the constitution and has urged, “Stakeholders” to engage in dialogue.
As a reminder, Assoumani, a former military officer, first seized power in a coup in 1999. He served an elected term as president from 2002-2006, and was re-elected in 2016.
The archipelago which became independent from France in 1975 has endured several political crises over the years including a spate of coups. A new constitution was adopted in 2001 which stipulated the rotation of power every five years between the islands.