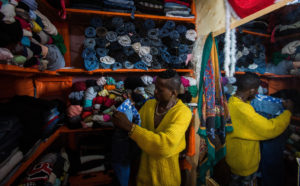 U.S. President Donald Trump on Monday suspended Rwanda’s ability to ship apparel products duty-free to the United States due to a trade dispute between the two nations.
The trade dispute began in 2015, when Rwanda, Tanzania, Uganda, Kenya and Burundi announced their intention to phase out imports of second hand clothing and shoes from western countries by 2019 to support their domestic textile industries.
The U.S., worried that the decision would cost thousands of jobs in its used clothing industry, threatened to remove participating countries from the African Growth and Opportunity Act (AGOA), which allows duty-free access to the U.S. market for more than 6,500 products.
Kenya, Tanzania and Uganda agreed not to go ahead with the tax, but Rwanda followed through and even hiked tax rates on second-hand clothes.
The White House, which under Trump has championed an American First trade policy, said the Monday ban will maintain Rwanda’s other duty-free benefits under the African Growth and Opportunity Act.
The move according to Deputy United States Trade Representative, Mahoney would affect about $1.5 million in annual Rwandan exports, or only about three percent of the country’s total exports to the United States.
Note that Rwanda has made huge economic progress in the past 25 years. But officials argue that the ubiquity of recycled apparel – known as Chagua – has stifled the growth of its nascent textile industry and has dented national pride.