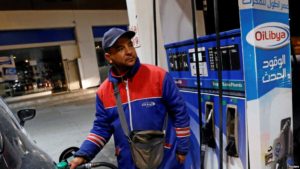 Tunisia has raised fuel prices over the weekend by 4 percent, the fourth hike this year, as the government seeks to cut budget deficit, a key requirement of international lenders.

According to a statement issued by the Ministry of Industry Saturday, the price of one liter of fuel rose to 1.985 Tunisian dinars compared to the previous rate of 1.925 Tunisian dinars.

The International Monetary Fund approved in April the payment of a $257 million tranche of Tunisia’s loan program and urged the government to raise energy and transport prices as well as retirement age to help curb the budget deficit.

The IMF had said that among the priorities for 2018, Tunisia needed to strengthen tax collection and freeze wage increases unless growth surprises on the upside.

The North African nation has dropped into a deep economic slump following the overthrow in 2011 of autocratic leader Zine El-Abidine Ben Ali.

The country’s national economy grew 2.6 percent in the first half of this year, compared to 1.9 percent in the same period of 2017, the National Institute of Statistics (INS) said last week.