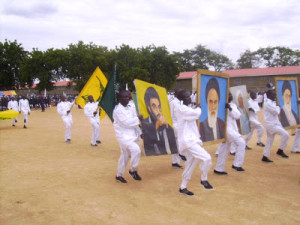 While the world media and analysts are still focusing on the direct involvement of Hezbollah in the Syrian war and commenting on the impact such an involvement may have on the final outcome of this war, the Lebanon-based Shiite movement came to the forefront again last week, but this time not in the Middle East but far away in Africa.
The Nigerian Department of State Security Service (DSS) actually announced last week the dismantling of a Hezbollah cell, in Northern Nigeria.
The announcement was made in connection with the discovery of a huge cache of arms near Kano, northern Nigeria, and the arrest of an outstanding Lebanese businessman.
The cache of weapons, reportedly destined to launch attacks against Israeli and Western targets in the African country, was uncovered by officers of the DSS and of the Nigerian Army in a banker dug under the bedroom of the Lebanese national.
Three Lebanese expatriates have been arrested in connection with this case while a fourth suspect is on the run. One of the suspects in custody has been identified as the owner of Wonderland, an amusement park in capital city Abuja.
While the DSS talked immediately after the discovery of a Hezbollah cell, indicating that the Lebanese national had ties with the Lebanese Chiite movement, the government launched an investigation to find out whether there is a connection between Boko Haram, the Jihadist militant organization based in north-eastern Nigeria and northern Cameroon, and Hezbollah.
The Nigerian government which insisted that no action would be taken before the alleged link between Boko Haram and Hezbollah are confirmed, underscored that the behaviour of an isolated group of citizens cannot tarnish the “excellent” relations existing between Nigeria and Lebanon.
“What we are reading from the press needs to be confirmed. We would study the situation and take the appropriate action when we do so. Lebanon is a country with which we have excellent bilateral relations. It would not be right to judge a relationship with a country based on the conduct of a few citizens,” the Permanent Secretary of the Nigerian Foreign Ministry was quoted by the media as saying.
Boko Haram group which has launched many terrorist attacks in the northern parts of the country, is believed to have killed over 1,000 Nigerians since 2009.
The Nigerian government obtained on May 25 an order from the Federal High Court banning Boko Haram and another militant group “Jama’atu Ansarul Muslimina fi Biladis Sudan” (JAMBS) from existing or operating in the country.
Under the court order, any Nigerian who belongs to or professes to belong to Boko Haram or any terrorist group, is liable to a penalty of 20 year imprisonment and any Nigerian who assists, provides logistics, equipment or attends a meeting of either Boko Haram or JAMBS will be sentenced to 10 years in prison.
Also, this week, the United States posted a $7 million reward to help capture the leader of Boko Haram, Abubakar Shekau. It is the highest reward in the $23 million package offered by Washington to help arrest the Boko Haram leader and the leaders of four other militant groups operating in West Africa and Nigeria. These include Al-Qaeda chief Mokhtar Belmokhtar and Yahya Abou Al-Hammam, a top figure in Al-Qaeda in the Islamic Maghreb, according to the US posting.
While Nigerian authorities are investigating the would-be links between Boko Haram and Hezbollah, analysts recall that the Bulgarian Government had talked of Hezbollah’s involvement in the bombing of a tourist bus that killed five Israeli tourists and a Bulgarian bus driver in July 2012, saying that there was a “reasonable assumption” that two of the perpetrators of the bombing were members of the militant wing of Hezbollah.
In its recently released annual report in trends in political violence, the State Department said that “Iran and Hezbollah’s terrorist activity has reached a tempo unseen since the 1990s.”
The report cited a series of actual and planned attacks in Europe and Asia which it claims are linked to Hezbollah. Next year’s report will undoubtedly add to Hezbollah’s militant activity the African connection.