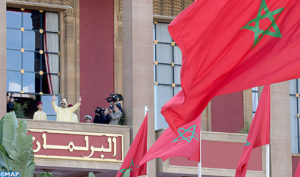 The youths’ employment and adequate training for jobs in high demand as well as the improvement of socioeconomic situation of young people continue to be among the top priorities of King Mohammed VI.

“The important instructions I have given in connection with employment, education, vocational training and military service are meant to benefit citizens, especially young people” whose employment is “one of my foremost concerns”, stressed the King in a speech he delivered Friday before the MPs of both Houses of Parliament at the opening of the parliamentary fall session.

“Vocational training is a powerful lever for employment, provided it receives the attention it deserves and so long as it is given a new status as well as a broader scope,” said the King, stressing the necessity “to work on creating more bridges and links between vocational training programs and general education courses within a unified, integrated system”.

“There should also be a balance between theoretical training, on the one hand, and practical, workplace training, on the other,” he stated before noting that there are a number of sectors which can contribute to creating more job opportunities.

The agricultural sector can constitute a more dynamic source of employment opportunities and be instrumental in improving living conditions and consolidating stability in rural areas, explained the Moroccan Sovereign, calling for the creation of more employment and income-generating opportunities, especially for youths in rural areas.

“I therefore urge the government to come up with innovative mechanisms in order to continue incentivizing farmers to become more actively involved in productive agricultural cooperatives and groupings, and to seek training in the agricultural field”, said the Monarch.

He also called for improved access to land, making it more easily available to investors in a bid to increase production, boost productivity and stimulate employment.

To create more jobs, “we should consider the possibility of having quality initiatives and global leaders involved in some sectors and professions – such as the health care sector – which are not currently accessible to foreigners, provided the said projects contribute to the transfer of know-how and create employment opportunities for young Moroccans with the right qualifications”, added the Sovereign.

King Mohammed VI who cited the proposals and studies made by some Moroccan institutions and agencies on a new development model that would close the social and economic gaps, while focusing on education, training, employment and youth issues, public support and social protection, called in this vein for the implementation of effective social policies and the promotion of solidarity-based initiatives at various levels.

To this end, regulations must be simplified in order to encourage various forms of donation, volunteer work and charity, and to support social initiatives and socially responsible businesses, said the Moroccan Monarch, noting that new mechanisms should also be put in place to engage the private sector in tackling social issues and contributing to better services to citizens.

“Morocco must be a country of opportunity, not of opportunists. All citizens, without exception, should be given the same chance to serve their country, and all citizens must benefit, on an equal footing, from the country’s resources and from opportunities for growth and advancement”, underlined the King.

“This requires a genuine sense of patriotism, collective mobilization and a clear will to put the homeland and the citizens above all else,” the Monarch said.