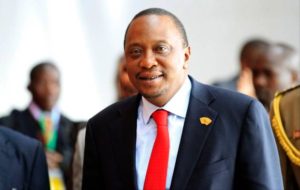 huKenya’s President Uhuru Kenyatta, on Tuesday, refuted claims that his party is interested in amending the country’s constitution to allow him to stay in power after his second term in 2022.

“I’m not interested in a third term, Kenyatta, told international broadcaster, CNN’s Richard Quest. He said he would not go for the Presidency again even if given a chance to do so.

Kenyatta is serving his second and final term and is expected to retire in 2022 as the Constitution demands a Head of State should serve only for a maximum of two consecutive 5-year terms.

Opposition leader Raila Odinga, who lost the 2013 and 2017 presidential elections to Kenyatta, has been leading calls for a referendum to amend the constitution.

Odinga lost a bitterly contested election to Kenyatta last year. He mounted a successful court challenge which ordered a fresh poll. He, however, boycotted the second contest citing a biased electoral commission.

Calls for a referendum to reduce the number of representatives in the country continue to spark sharp division among elected leaders and even ordinary citizens.

According to Kenyatta, the leaders who are calling for a referendum are doing so due to an urgency to reduce the cost of living for Kenyans, and not to extend his term in office.