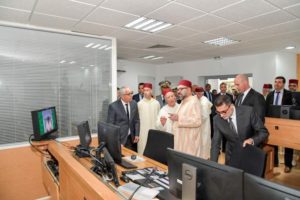 King Mohammed VI, in his quality as Commander of the Faithful, on Friday launched a Radio and TV program, “Addourous Al Hadithia”, designed to explain the Hadith, Prophet Mohammed’s sayings, as it was authenticated by his companions and by Imam Malik.

The Sovereign, who was accompanied by Crown Prince Moulay El Hassan, visited the headquarters of the National Broadcasting Corporation (SNRT) in Rabat to oversee the launch of the new religious talk show, “Addourous Al Hadithia”, to be aired by the Mohammed VI Radio of the Holy Quran and Assadissa TV channel.

The sovereign then gave the signal for the recording and the airing of the inaugural talk show, presented by the Secretary General of the Higher Council of Ulemas, Professor Mohamed Yssef.

This new royal initiative is meant to disseminate the authentic sayings of the Prophet and their meanings, to educate people about the Prophet’s Tradition as the second source of Islam, and to correct the false Hadiths circulated, especially via the Internet, to spread confusion and ideologies that are alien to Islam.

The new program also aims to highlight the unity of the Moroccan Nation when it comes to religion and to counter attempts to distort this religion as these attempts are sometimes designed to attract would-be extremists.

The weekly “Addourous Alhadithia” program will include lectures on the Prophet’s recommendations concerning the transmission of his sayings, on the Prophet’s companions and on the method of Imam Malik in the authentication, collection and codification of the Hadith.

The program, supervised by the Higher Council of Ulemas and Al-Quaraouyine University, also features talk shows with Hadith scholars and theologians to be moderated by a TV or radio anchor. A question time will allow TV watchers and radio listeners to pose their queries by telephone, mail or WhatsApp.

The program will also be broadcast live on the Internet.