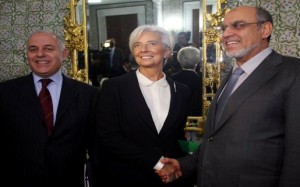 The Executive Board of the IMF has finally approved a 2 year Stand-By Arrangement, for an amount equivalent to Special Drawing Rights (SDR) $1.74 billion to Tunisia, to support the country’s economic reform program during the 2013-2015 period.
The approval of the emergency stand-by loan deal is geared towards strengthening fiscal and external buffers, and fostering higher inclusive growth. A statement released by the IMF stated that the amount that will be dedicated to Tunisia is “equivalent to Special Drawing Rights $150.2 million”. This is equivalent to 400% of Tunisia’s quota. According to the release, Tunisia can at any moment knock on IMF’s doors because the sum “is available for immediate disbursement.” The remaining amount is however attached to conditions of reviewing 8 programs during the period of the two-year emergency deal.
The approval will ignite a new debate in Tunis; after several members of parliament criticized the conditions attached to it will undermine Tunisia’s sovereignty. The Deputy Managing Director and acting Board Chair of IMF, Nemat Shafik, said Tunisia’s economic recovery is moderate. She added that the political environment in the country coupled with the global economic situation will make it an immense task for the country. She pointed out that a weak banking system, pressing social demands, widespread regional disparities and high unemployment were key challenges, together with widening external and fiscal deficits.
Tunisian authorities have set up an economic program to overcome these challenges and it is becoming successful in reducing vulnerabilities through tighter monetary policy, greater exchange rate flexibility and reduced subsidy cost. Ms. Shafik said this program “aims to strengthen fiscal and external buffers, while laying the building blocks for stronger growth and protecting the most vulnerable.”