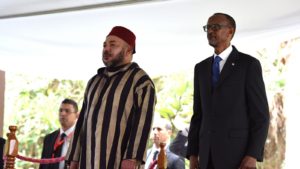 King Mohammed VI has voiced his full backing to the vision of President Paul Kagame of Rwanda, acting chairman of the African Union, for the reform of the Pan-African organization.

The Moroccan Sovereign expressed his support in a telephone conversation he had on Monday with Mr. Kagame on the eve of the Extraordinary summit of the AU expected to take important decisionson the institutional reform of the Organization.

The reforms proposed by Rwanda’s President seek to revamp the African Union structures, working procedures and boost its financial independence.

During the phone call, King Mohammed VI and President Kagame also hailed the positive development and the promising prospects for cooperation between the two countries in all areas.

Relations between Morocco and Rwanda have gained momentum since the visit paid by the Moroccan King to Kigali in 2016 within the frame of an African tour.