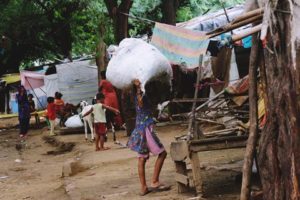 The United States will end Mauritania’s trade benefits under the African Growth and Opportunity Act (AGOA) at the start of next year, the US trade representative’s office said. Nouakchott denounced the move as a “betrayal”.

Washington accuses the West African nation of tolerating forced labor and hereditary slavery. The country’s slow moving process of abolishing the practice has also been echoed by the African Union.

Mauritania has been a member of the African Growth and Opportunity Act (AGOA) initiative since it was launched in 2000.

Washington’s decision this week comes following an annual review of eligibility for AGOA. The US Trade Representative’s office said Mauritania does not meet the requirement for trade benefits as it has not made enough progress to end forced labor.

“Mauritania has made insufficient progress towards combating forced labor, in particular, the scourge of hereditary slavery,” it said.

Deputy US Trade Representative, C.J. Mahoney said, forced or compulsory labor practices like hereditary slavery have no place in the 21st century.

Mahoney said, he hopes Mauritania will work with the US to eradicate the practice so its AGOA eligibility may be restored in the future.

Mauritanian government spokesman Mohamed Ould Maham criticized the move on Twitter Monday, calling it “a betrayal of the friendly relations between our countries and a denial of our efforts” to roll back slavery practices.

“Would Trump have taken this decision if he was expecting a $110-billion arms contract with us?” Ould Maham asked ironically.

As a reminder, Mauritania criminalized slavery in 2007 and in 2015, made it a crime against humanity punishable by up to 20 years in prison.

AGOA is a preferential trade program, which allows a set of eligible products from designated African countries into the US market.

Its main objective is to promote economic development through increased trade and investment between the US and sub-Saharan Africa.