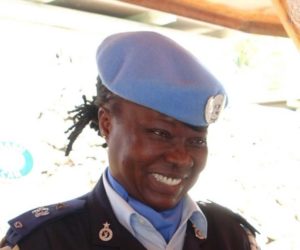 A Ghanaian policewoman on Monday won an International Female Police Peacekeeper Award from the United Nations Mission in Somalia.

Chief Superintendent of Police, Mrs. Phyllis Ama Tebuah Osei, was selected for the Award as her policing work directly and positively impacted the community and the host state police in Jubaland, Somalia, the UN said.

According to the UN, her contributions to enhancing the protection of women and girls, as well as her initiatives to promote women’s rights in the host state police, embody the spirit of the Award.

Officer Osei has been particularly successful at initiating adult literacy training for 49 female police officers in Jubaland. The training’s overall goal is to improve their literacy and increase their chances for future promotions. She also formed a Female Peacekeeper Network (FPN) within UNSOM and AMISOM to provide support to female peacekeepers.

“It is an honor to work for UNSOM, where I assisted in strengthening activities on gender and child-related issues,” said Osei. “I also support the police in Jubaland on issues of Justice and Human Rights,” she added.