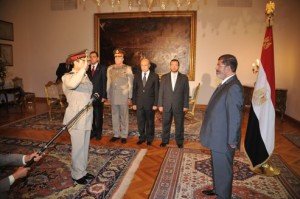 The Egyptian army has threatened to intervene in other to avoid any possible chaos ahead of a planned manifestation next Sunday.  The 30th of June will mark the first anniversary of Mursi’s election to power, as opposition leaders persistently demand his resignation.
The Egyptian defense minister Abdel Fattah al-Sisi said in a statement “The armed forces have the obligation to intervene to stop Egypt from plunging into a dark tunnel of conflict and infighting”. During his meeting with the military, the defense minister called on all Egyptians to put away their differences and further added that it’s the duty of the army to act in order to avoid all possible unrest and instability.
Thousands of Egyptians have gathered around the defense ministry demanding the president to step down saying that he has not responded to the demands of the revolution. Millions of Egyptians have signed to the “Tamaroud” (rebellion in Arabic) petition against the Morsi government.
According to reports from Perrine Mouterde, France 24 correspondent in Cairo, a young Egyptian woman Walaa said she voted for Mursi in the past elections after the fall of the Mubarak regime, but insist that nothing has changed.
“Since then, nothing has changed – nothing,” says the single, unemployed young woman. “The situation is even worse, both internally and in our external relations. The Muslim Brotherhood listens to the people when they need their votes and then they forget about us. They have divided Egyptians.”