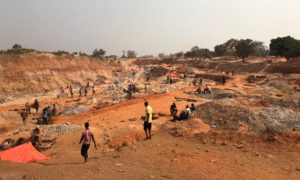 Democratic Republic of Congo is Africa’s top copper producer and the world’s leading miner of cobalt, a mineral which has seen a surge in demand due to the manufacture of electric car batteries and mobile phones.

The new project of Zhejiang Huayou Cobalt Co will be located in the Lukuni region in the south of DRC, and will have annual electro-deposited copper production capacity of 30,000 tons, according to Reuters.

The company, whose new investment will be made through its subsidiary Congo DongFang International Mining (CDM), has built two cobalt refineries in the Luiswishi region of DRC after buying copper-cobalt mineral rights from La Generale des Carrières et des Mines in 2015. The new copper project is expected to be launched by September 2019.

More than 60% of the world’s supply of cobalt is mined in the “copper belt” of the south-eastern provinces of DRC. According to the government agency, which oversights the informal or “artisanal” mining sector, at least 20% of this supply is mined by locals.

The remainder is produced by industrial mines that are typically operated by foreign companies following the collapse of the state-owned mining concern, Gécamines.