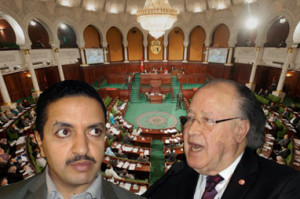 The first parliamentary debate on Tunisia’s latest draft constitution was brought to a sudden end with accusations that the head of the drafting committee, Islamist Member of Parliament Habib Kheder, tampered with the draft by introducing controversial articles. The opposition has been accusing the draft committee of fraudulent acts during the course of elaboration.
The debate lasted for not more than 30minutes when the MPs from the opposition decided to interrupt Habib Khader before chaotic scenes took over due to the tension it resulted into. He is accused of adding controversial articles in a discretionary manner. The same scenario produced itself when Khader took a second attempt after nerves were expected to calm down.
Their actions were strictly criticized by the deputy speaker of the assembly, Meherzia Laabidi, who referred to those who interrupted the debate as “dwarfs” and said that “the men of Tunisia remained seated.” He claimed that it was a manifestation of “immaturity in the ranks of the opposition.”
During the interruption, the members of parliament were chanting slogans and signing the national anthem. Protesters against the draft were also present outside the national assembly while the civil society and opposition activists are concerned that the steps taken by the government don’t assure basic liberties. The speaker of the assembly, Mustapha Ben Jaafar, said the constitution represents “all Tunisians” because the committee “wanted to build a constitution on solid bases, guaranteeing freedoms, human rights and the rights of women.”
Prior to the interruption of the head of the draft committee, a statement was released by several secular opposition members in the parliament claiming that “fraudulent process” has jeopardized the work of the committee. Amnesty International said that the draft doesn’t salute the principles of international human rights.