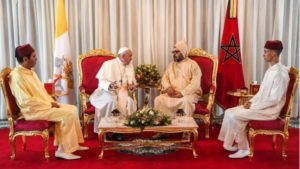 Pope Francis paid Saturday and Sunday a historic visit to Morocco that he concluded with the celebration of a papal Mass at the Prince Moulay Abdellah sporting complex in Rabat. The Mass, which was aired worldwide, was attended by nearly 10,000 members of Morocco’s Catholic community.

In his homily, the spiritual leader of the Catholic world, focused on the need to reject hatred, division and revenge, calling for the promotion of a culture of mercy and welcome.

Both Moroccans and Catholics will never forget the historic visit paid by Pope Francis to the North African Kingdom at the invitation of King Mohammed VI, Commander of the Faithful.

During his visit, the first by a pope in 34 years, the pontiff lauded Morocco’s religious tolerance and sustained efforts to promote moderate Islam that values inter-faith dialogue and rejects terrorism in God’s name.

On the esplanade of the Hassan Mosque, King Mohammed VI and the Pope exchanged speeches wherein they tackled the challenges of present times, such as ignorance that leads to extremism, poverty and migration.

“Radicalism – whether it is motivated by religion or not – is due to failure to know one another, to ignorance of the other, and to ignorance pure and simple,” said King Mohammed VI, Commander of the Faithful, in his speech.

To tackle radicalism, the solution is neither military nor financial; that solution has but one name: Education, the monarch said, noting that given the reality of today’s world, “it is clear the dialogue between the Abrahamic religions is insufficient.” What all terrorists have in common is not religion, but rather ignorance of religion”, underlined the Commander of the Faithful.

Morocco, which is a Muslim country, is known for its religious tolerance and respect of other faiths in a region rocked by violent extremism.

The pope on his part stressed “once more our need for cooperation in giving new impetus to the building of a world of greater solidarity, marked by honest, courageous and indispensable efforts to promote a dialogue respectful of the richness and distinctiveness of each people and every individual.”

All of us are called to rise to this challenge, especially at the present time, when our differences and our lack of reciprocal knowledge risk being exploited as a cause for conflict and division. If we wish, then, to share in the building a society that is open, fraternal and respectful of differences, it is vital to foster the culture of dialogue and adhere to it unfailingly, to adopt mutual cooperation as our code of conduct and reciprocal understanding as our method and standard, he said.

Speaking of the Mohammed VI Imams’Training Institute, His Holiness Pope Francis commended the Monarch for providing “sound training to combat all forms of extremism, which so often lead to violence and terrorism, and which, in any event, constitute an offence against religion”.

In the Afternoon, the two leaders visited the Institute, set up by the Monarch, for Imams, male & female preachers from Muslim countries, Africa and Europe on a softer version of Islam to counter the threat of extremism.

The visit was an opportunity to highlight the mission of this center that teaches the values of an Islam of moderation, peace and tolerance.

Pope Francis dedicated Sunday, the 2nd day of his Apostolic Journey to Morocco, to the country’s small Catholic community.

The number of Catholics in the predominantly Muslim nation is said to be 23,000.

The Pope thus visited a social center situated in Témara, on the outskirts of Rabat. The “Rural Center for Social Services”, run by three sisters, provides around 150 children with material and psychological care.

The pontiff met the same day with priests, religious women and men, and members of the ecumenical council of churches. He also met with migrants at the offices of aid agency Caritas as the Catholic Church in Morocco works mainly with people from Sub-Saharan Africa, who make up to 70 percent of churchgoers.

The Moroccan trip of the pontiff was marked by the joint call launched by King Mohammed VI, Commander of the Faithful & Chairman of the Al-Quds Committee, and the Pope for the protection of the multi-faith and sacred character Al-Quds Al-Sharif, cradle of the three monotheistic religions.

“We believe it is important to preserve the Holy City of Jerusalem / Al-Quds Al-Sharif as a shared heritage of humankind and to safeguard it, above all for the believers of the three monotheistic religions, as a symbol of peaceful coexistence and as a meeting place where mutual esteem and dialogue are fostered”, said the two leaders.

They also affirmed that the uniqueness, the spiritual dimension and special identity of Al-Quds Al-Sharif must be preserved and enhanced.

“We therefore hope that, in the Holy City, the followers of the three monotheistic religions will be guaranteed free access to religious sites as well as the right to practice their faith there, so that from Jerusalem / Al-Quds Acharif, the believers may address a prayer to God, the Creator of all beings, for a future of peace and brotherhood on earth”, said King Mohammed VI and Pope Francis.