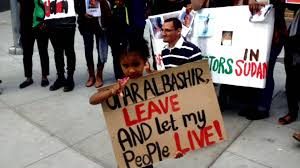 The Soudanese army Saturday opened fire on the anti-riot forces at the largest demonstration calling for the country’s President to step down.

Sudan has been embroiled in political crisis since December with repeated demonstrations demanding President Omar al-Bashir to leave power.

Saturday demonstration in capital Khartoum called by organizers took place around military headquarters of the army as demonstrators hoped to win the army on their side.

The army took the protestors by surprise by firing at security and intelligence forces tasked to disperse the march. The move is unprecedented and heralds a tilt on the side of the demonstrators.

Sunday the government through the minister of communication warned against threats of civil war over mobilization of funds by opposition parties, the association of the professional Sudanese with the support of foreign communities in the country.