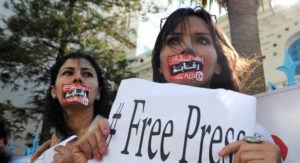 Tunisia with its fragile democracy has ranked the first Maghreb country favorable for journalists, on Reporters Without Borders (RSF) 2019 index released Thursday.

The North African country stands at the 72nd position over 180 countries featuring into the ranking. Tunisia with this new rating leapfrogged its ranking as it came in the 97th place on the 2018 index.

The index focused on several criteria such as pluralism, media independence, media environment and self-censorship, legislative framework, transparency, and the quality of the infrastructure that supports the production of news and information.

Tunisia is far ahead of its regional neighbors Mauritania (97); Morocco (135); Algeria (141); and Libya (172). According to the report, both Morocco and Algeria took steps backward.

Despite Tunisia’s laudable advance, the ranking’s author argues that Tunisian authorities are dragging foot in the development and implementation of a new work framework for media and journalists.

Norway, in the 1st rank, followed by Finland and Sweden lead the world on the index. The worst performers are Turkmenistan (180), North Korea (179) and Eritrea (178).