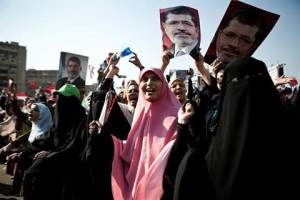 Morsi’s supporters are getting ready to protest peacefully in what they call a “Friday of Rejection” following his ousting by the military and the arrest of top officials of the Muslim Brotherhood. It can be recalled that Morsi called for a peaceful demonstration against the intervention of the military in ending his rule.
The supporters are calling the military intervention a coup d’état and the Friday demonstration organized by he National Coalition in Support of Legitimacy, an Islamist coalition led by the Muslim Brotherhood is urging people to reject their intervention. They are also marching against the recent arrests of the Brotherhood’s top brass.
Mohammed Badie, a key leader of the group, was arrested in a villa close to the Libyan border by the military, before being flown into detention by a helicopter, according to officials who spoke on the condition of anonymity. Sources claim that his arrest together with his deputy, Khairat el-Shater, was demanded by the prosecutor’s office. Reports have claimed that they are most likely to be charged for inciting violence and the killing of protesters in front of the Brotherhood’s headquarters in Cairo’s southern neighbourhood called Mokattam.
Next week, Morsi is also expected to face an investigation of allegations that he “insulted the presidency,” state prosecutors said. The spokesman of the Brotherhood; Gehad el-Haddad; said they are “being headhunted” in Egypt with reports that more than 300 arrest warrants targeting the brotherhood has been issued. He said the Friday protests will be used “to take all peaceful steps necessary to bring down this coup.”
Islamists TV stations have also been taken off air. The coalition is therefore urging people to mobilize themselves “peacefully” and say “No to military detentions (and) No to the military coup.”