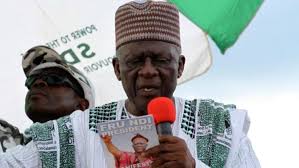 In Cameroon, unidentified gunmen have kidnapped, the leader of one of the country’s leading opposition parties. It was the second kidnapping of the Social Democratic Front’s (SDF) chairman in two months.

John Fru Ndi, 77, was abducted from his home in the city of Bamenda by gunmen who wounded his bodyguard, an SDF statement said.

John Fru Ndi, who had finished runner-up to President Paul Biya in the 2011 election, was kidnapped in April in the town of Kumbo during a funeral procession and held for a few hours before being released.

According to the party, the separatist rebels who are battling government forces in English-speaking areas of the bilingual Central African country, tried to convince the party’s chairman to support their cause.

The party had called Biya to step down in favor of a transitional government than can resolve the separatist conflict.

President Biya has been in power since 1982, making him one of Africa’s longest-serving leaders. Under his rule, Cameroon has survived an economic crisis and moved from being a one-party state to a multi-party system.

The anglophone unrest began after lawyers and teachers in the English-speaking regions peacefully protested what they called creeping marginalization by Cameroon’s French-speaking majority. English speakers make up about 20 per cent of the population.