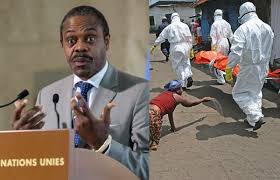 In democratic republic of Congo, health minister Oly Ilunga has resigned from his post in protest at the presidency’s decision last week to take control of the response to the Ebola outbreak in the east of the country.

Oly Ilunga’s resignation letter decried what he described as interference in the management of the response to the outbreak – the second-deadliest in history.

The minister also criticized what he termed pressure by unidentified “actors” to deploy the second vaccine, manufactured by Johnson & Johnson.

Johnson and Johnson says the vaccine has been tested on more than 6,000 volunteers and raised no particular safety concerns.

The WHO and other international donors including the medical charity Doctors Without Borders have publicly supported using the second vaccine.

The second vaccine has yet to be used in the Congolese outbreak because of Dr. Ilunga’s objections. It is designed to complement a Merck treatment that has been given to 170,000 people and proved effective. Since last August, more than 1,700 people have died of ebola.

Last week, WHO declared the outbreak an international health emergency and advised that borders should be closed.